College radio: Beyond a Spot on the Dial

My article on challenges for college radio in the United States, Beyond a Spot on the Dial, has been accepted for publication in a special issue of Radiofonias – Journal of Audio Media Studies. 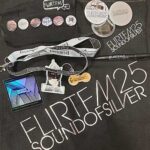